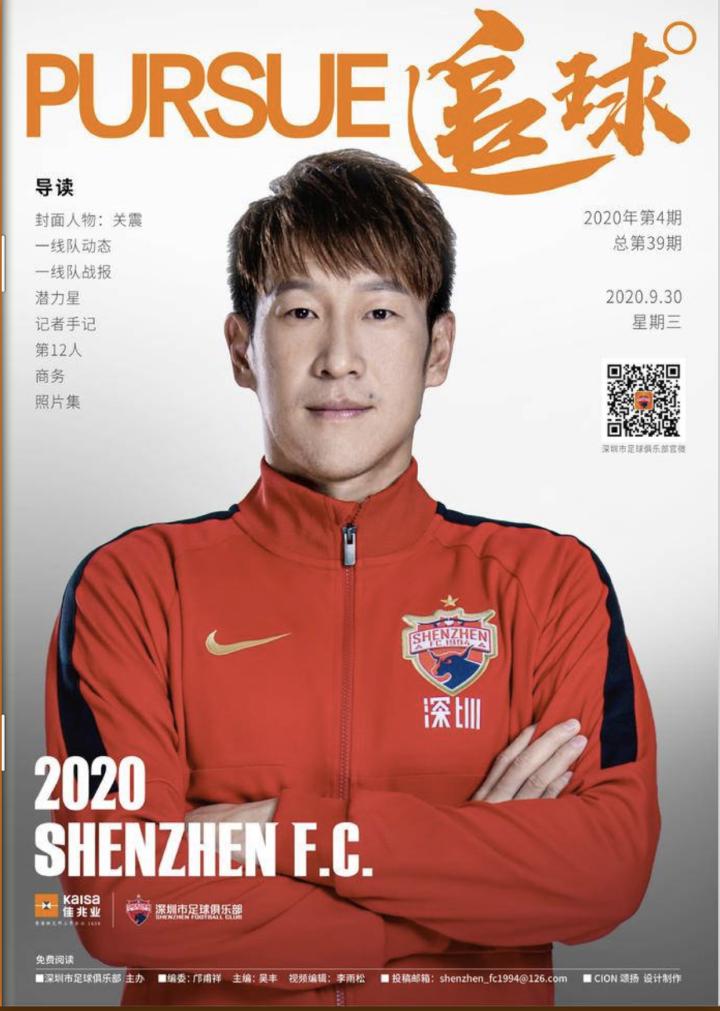 In his fourth year in Shenzhen, Guan Zhen made an important decision: gradually withdraw from the goalkeeper line and devote himself to coaching. What are his experiences and perceptions in his new position?

"As a goalkeeper assistant coach, I hope to put my heart and energy into bringing young goalkeepers well, and strive to cultivate outstanding national players from my hands, and contribute to the club, Kaisa, and Shenzhen."

This issue also has

Coming to Shenzhen to pursue dreams

Feelings of interview with team reporters in Dalian

Voice of the fans

More exciting pictures of the game 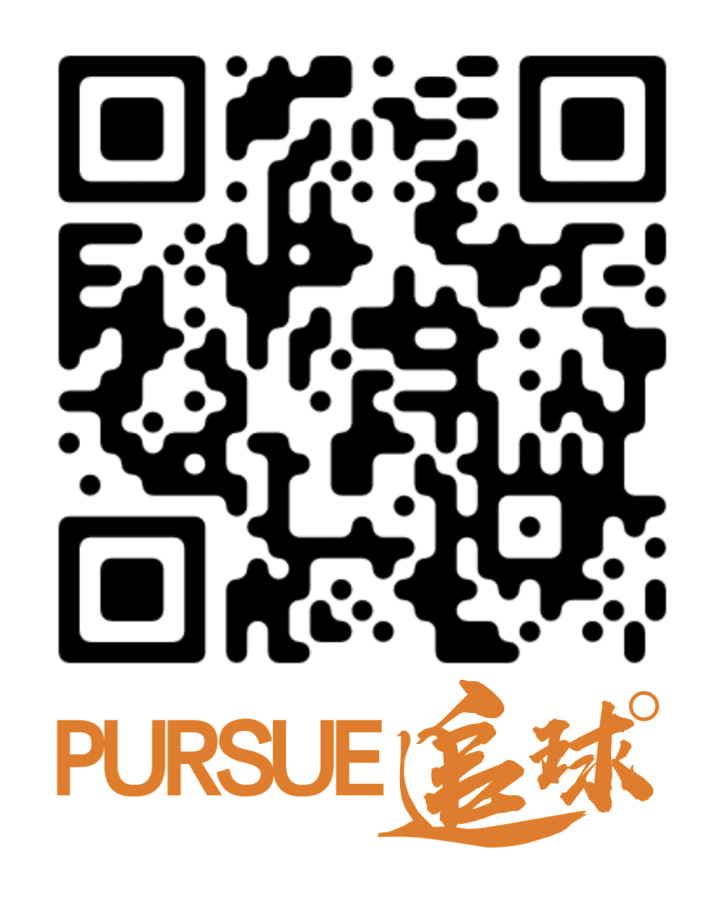 Long press to recognize the QR code above

This issue of the team publication is limited to online distribution, fans and friends can collect it and watch it slowly~

Q: Tell me the story of my connection with football as a child

A: When I was in the first grade of elementary school, the physical education teacher thought that I was more naughty. When I watched my free activities, I was always running around the field. I also had a talent for playing football. So I talked to my parents and asked me to practice on the school football team. Practice, the family agreed.

Q: How did you embark on the path of professional football?

A: Around 1997, our school team went to Nanning, Guangxi to play a game, and I was selected by the Locomotive Club (a football club under the former Ministry of Railways). It happened to be close to home in Tianjin, and the family thought that if they could not get out, they could still find a job in the railway system, so they chose to join, and then transferred from the locomotive to the Luneng Football School.

Q: When did you decide to be a goalkeeper?

A: At first I played as a full-back, but I always ran to the full-back position. The teacher suggested that I change my position. As soon as I saw that the goalkeeper's position was good and didn't feel too tired, I chose the goalkeeper. Later it was discovered that goalkeeper training was just as hard.

Q: Why did you choose to enter Luneng Football School?

A: Locomotive wanted to send us to the Tianjin team, but at that time TEDA charged almost 20,000 yuan a year. The conditions at home were not very good, so he didn't choose Tianjin. At that time, the Luneng Football School had just been established for two years. Not only did it not charge us money, but it also gave some monthly subsidies. And the coach they hired was Kokovic, a godfather-level youth coach in Yugoslavia. I think the potential is greater, so I went to Luneng with some teammates.

Q: Do you have any unforgettable memories in Luneng?

A: The most unforgettable thing is that Luneng Football School is very formal. Classes are held every Monday, Wednesday, and Friday mornings, and on Tuesdays and Thursdays are all-day training, Saturdays and Sundays. The whole year is very scientific, and the training plan is very well arranged. In those two years, I grew up very quickly. After two years in U17, I was selected to the first team.

Q: What kind of abilities do you think a good goalkeeper needs?

A: I think the most important thing is the psychological quality and the ability to read the game. A good goalkeeper will perceive some dangerous situations that others can't. He will resolve the danger in advance by echoing or other means before the opponent shoots, instead of having to save every time.

Q: What is the most satisfying save in your career?

A: In 2016, when I played Hengda away in Shijiazhuang, I saved a penalty shot by Gao Lin. You must know that Gao Lin's penalty kicks are rarely saved by the goalkeeper. I have been teammates with him for many years, and I know his characteristics better. Knowing that it was him who came for the free throw, I was a little bit happy. After the jump, we tied Evergrande away, so the memory is very clear.

A: When I was in the national team, Ou Chuliang taught me a lot of things, but I didn't understand it at the time. Later, when I became more and more mature, I found that the content he taught me was very advanced and very useful.

Q: Who is your idol in the goalkeeper range? What qualities do you most admire him?

A: Buffon, Cassie, and Kahn are all older than me. They all have one characteristic of that era, that is, they are very good in door line technology and basic skills. Now three of them like Neuer, Ter Stegen and Oblak are more modern goalkeepers, especially Oblak I like very much.

Q: We noticed that you practice more after training almost every day. Why is that?

A: The content of a training class can be consolidated during additional training, and your deficiencies can also be compensated by additional training. For example, my left foot didn't practice very well when I was young, so I can strengthen myself when I grow up. Cristiano Ronaldo has also practiced. Many times Cristiano Ronaldo goes to the gym early. His elevator ball can't be born, he must be trained.

Q: In 2017, you joined Shenzhen Kaisa. What was the opportunity?

A: At that time, Kaisa gave me the impression that I wanted to do something for Chinese football and the city of Shenzhen. It was a very thoughtful club. I also wanted to achieve some good results at the end of my career, so I came.

Q: In the past few years of joining Shenzhen Football Team, you have experienced main players and substitutes, and now you are an assistant goalkeeper coach. How did you adjust your mental state?

A: It is normal to compete in the same position. Whether it is a goalkeeper or a player, it is impossible to maintain a high level and good condition for a long time. Like our club, the annual signings are also very high-level people. The competition is fierce. When you lose the opportunity to play twice, you have to adjust your mentality. No matter where you are, you must do your job well. If the state is not good and still be the main force, it may delay the overall performance of the team. Guowei and Zhang Lu are basically players of the year, and both of them are of very high level. I can withdraw slowly to give up positions to young players and give them more opportunities.

Q: You have experienced a lot with your company. Which match was the most impressive?

A: What impressed me most was 2017. When we started our five-game winning streak, we were sentenced to a penalty kick in the last minute of a match against Baoding. In the end, I saved the penalty and saved the victory. There is also the last-minute game where we beat Wuhan in 2018. If we didn't win that game, we wouldn't be able to make it that year.

Q: How do you feel different about transforming into a coach now? What are your new feelings about professional football?

A: It's really different. I have just transformed from a team member to a coach. I have to slowly face everyone as a coach. Be serious when you need to be serious, and joke when you need to relax. I am still slowly adapting to the changes in life and training. I often communicate with foreign coaches, and I will record every scientific training content of them and digest them into my own.

Q: After serving as the assistant coach of the team, has the rhythm of training and life changed?

A: The changes are quite big. When you are a team member, you don’t have to think so much, and you train for one or two hours every day. Now as a coach, I often have meetings with the coaching staff to discuss the overall and personal arrangements, which is very brain-intensive, and the mental work is indeed increased. A lot.

Q: After Cruyff Jr. arrived, how did you cooperate with the coaching team?

Q: What is your overall assessment of the first stage of the Shenzhen Football Club? What impressed you the most about the team this year?

A: This year is more united than previous years and has stronger cohesion and combat effectiveness. This is rare in previous years. Although we experienced a three-game losing streak at the beginning of this year, the team did not break up at that time. After Director Zhang and us took over, everyone was very united. They were all thinking about the team, doing their own training well, and adjusting their state to the best. For different opponents, we will use different people, such as the rotation of Jiang Zhipeng and Mi Haolun, the players are very cooperative. As long as the team wins, I can do whatever I need. Everyone thinks like this.

Q: What are your hobbies in daily life?

A: Drink tea, then get two bracelets, brush up with Yongpo and the others, and talk about antiques. This is the culture that Wang Yongpo brought to us. During the closed period here, I sometimes play billiards.

Q: Everyone in Tianjin can talk about cross talk. Can you talk about it?

A: Actually, I can't really talk about it among Tianjin people. I grew up early. But I dare say that I am also older, and the players would not mind if I make a joke. Everyone is joking with me, and I can accept it, so I can be active in the team. As for cross talk, I really don't know how to talk about it.

Q: Not long after your wife gave birth to her second child, you are coming to Dalian to be closed for two months. Do you have anything to say to your family?

A: Thank you for taking care of my boss and second child. In this situation of the epidemic, for the benefit of the team, I feel that personal sacrifice is nothing, and the child is still small, and someone at home can take care of it, but I really appreciate my family.

Q: What are your expectations for your future career development?

A: First of all, thank the club for their trust in me, which gave me the opportunity to transform from a player to a goalkeeper coach. As a goalkeeper assistant coach, I hope to put my heart and energy into taking young goalkeepers well, and strive to cultivate outstanding national players from my hands, and contribute to the club, Kaisa, and Shenzhen.

Q: In the last two games of the first stage, many Shenzhen fans came to Dalian to cheer for the team. What do you want to say to them?

A: Thank you Shenzhen fans for supporting me over the years. We will play every game for the fans and strive to work hard in the AFC for the past two years. This year, in the case of the epidemic, there are still so many fans who have worked so hard to come to the away game, and I am very grateful.